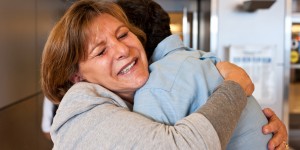 I’ve known this little guy since he was six months old. I’ve played with him, laughed with him, watched him, adored him, and been hit square on the head by his wooden sword (it really hurt!). To say I love him just seems like a profound understatement. He has a huge place in my heart. Recently, I went to see him and his eyes were not shining. Inquiring further he was really having a hard time. He had thoughts of killing himself. I was shaken to the core. How could this be? I’ve known him his whole life, how did I not see this? I teach suicide prevention, and I didn’t see it. I also had the thought, “God, please not him.” Why was this boy I loved so much hurting so badly? It tore at me.

I’ve had thoughts of killing myself most of my life but this was in a league of it’s own. It’s one thing to have these thoughts myself, but to witness this little guy hurting so badly seemed a million times harder. I know how it feels to want to kill yourself. Knowing he was feeling this broke my heart wide open. I didn’t want this for him. I ached knowing he was in pain, great pain.

So I asked myself, “Who am I being that his eyes are not shining?” I know his depression is not my fault. I know it’s not my job to fix it. I know it is not up to me to save him. Yet, I still loved the question. Who have I been being lately for him? The answer was quite clear, not much.

He’s pushed away from me in the last few years. We live close but I haven’t been in his life much. The reason, ego. He pushed away and I took it personally. I thought he didn’t want me in his life right now. I reacted to his distance and distanced myself. I stopped calling him. I stopped giving him holiday cards and fun little gifts. I stopped reaching out. I stopped all together. I was afraid of him rejecting me, so I let him dictate how things went. Simply, I stopped.

This little guy wasn’t withdrawing from me, he was withdrawing from life. Over the last few years he slipped into a depression and isolated himself further and further. I thought it was a phase. He’s just growing up, I reasoned. All the signs were there, I just didn’t connect the dots. That was not my sin. I didn’t see it and I certainly couldn’t blame myself for something I didn’t know. The golden nugget in all of this and the area of opportunity is in how I chose to love him. I let my fear get in the way of how I wanted to love him. I was afraid he would think I was a dork, annoying, or a bother. I wanted to be cool to him so I played it cool. Pure and simple, I stopped loving him the way that was pure and clean to my heart. I let my fear get in the way.

This three minute TED Talk this morning had another beautiful nugget for me. Ben, the conductor giving the talk, shared a story about a woman who survived Auschwitz. She was 15 years old and her brother was eight, when they were on the train headed to Auschwitz. Their parents were lost. On the train she looked down and saw her brother’s shoes were missing. She said, “You are so stupid! Why can’t you keep your things together? For goodness sake!” That was the last thing she ever said to him, as she never saw him again. He didn’t survive.

This story is familiar. I once said similar things to my brother before never seeing him again. The last words to my brother before he died were ones of anger. I lived with such shame and guilt over that for a long time. When I was finally able to let go of the shame I could see that there was a lesson in here for me. Always tell people how you really feel, never, ever, wait to say you’re sorry, and always let “I love you” be the last words. I had that realization about five years ago. I guess it was time for a reminder. The sister made a vow when she came out of Auschwitz to never say anything that couldn’t stand as the last thing she would ever say. That’s tough in world with so many words. However, I am reminded this morning to not let fear get in the way of love. Fear of looking bad, fear of failure, fear of rejection, fear of not being good enough, fear of being a fool… all of those fears have gotten in the way so many times for me. My fears don’t help anyone’s eyes to shine. Holding back my love isn’t helpful. I’ve never known anyone who didn’t, deep down, like hearing that they are loved. Teens may pull away and act like they don’t want to be hugged or loved on… they do. They need it during this time more than ever.

I know I will do my best to love this little guy how I want to love him, what is true in my heart, for the rest of my life. He has given me a profound gift of loving others the same, of loving without worrying about what comes back. I won’t always get it perfect. I may forget this at times. Sometimes the fear will win. This won’t be about being perfect, but I love it as a possibility to live into, of loving no matter what.